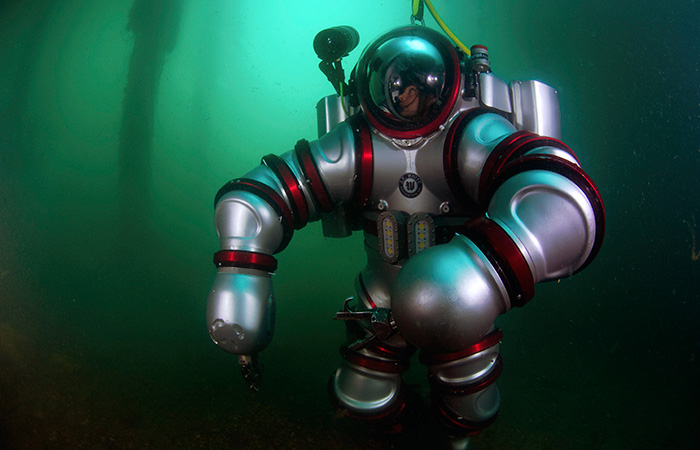 The 2014 expedition to the Antikythera shipwreck marks the experimental debut of a new robotic diving apparatus for use in marine archaeology—the Exosuit. (Courtesy of Brendan Foley, Woods Hole Oceanographic Institution)

When sponge divers first chanced upon the shipwreck off the Greek isle of Antikythera in 1900, they couldn’t have known that it would become the richest ancient shipwreck ever discovered.

But they soon found that this was no ordinary wreck, as they pulled up jewelry, coins, glassware, and life-size bronze and marble statues now housed in the National Archaeological Museum in Athens. The pièce de résistance was the unique and mysterious Antikythera Mechanism, a complex clockworks device, often called the first known computer, whose gears encoded the movements of the five planets known at the time, phases of the moon, and eclipses.

More than seventy years later, Jacques Cousteau returned to the wreck. His team found hundreds more artifacts, as well as the remains of four people, including a woman. But the Cousteau expedition merely unraveled the mystery a little further. They apparently explored only the galley and stern passenger compartment, leaving the main compartment untouched since 1901.

Next week a multinational team from the of the Hellenic Ministry of Culture and Sports’s Ephorate of Underwater Antiquities (EUA), Woods Hole Oceanographic Institution (WHOI), and the Australian Centre for Marine Robotics will return to the wreck site to investigate what else it may still hold…

Read the rest at Oceanus Magazine